With CVS Evaluation, the objective is to project the findings from the sample back to the population. After creating the sample and its high/low value items file(s) (if applicable) using CVS Sample Planning, the user is expected to export the data file(s) to Excel. After auditing the file(s) for correctness, the user should have two columns: one with the recorded amounts and one with the true, audited amounts. The user may choose to take advantage of the RECORDED_AMT and AUDIT_AMT columns that are created for the user’s convenience. Once the auditing of the sample and the high/low value file(s) is complete, the user can import the data file(s) back into ADA to perform CVS Evaluation. ADA’s Classical Variable Sampling Planning and Evaluation routines implement the methodologies laid out in Statistical Auditing (1977) by Donald M. Roberts for variable sampling to create the most accurate and faithful rendering possible.

To get started, open the Spec file created when you extracted the sample and click Monetary Unit > Evaluate. A Spec file is required to perform CVS Sample Evaluation because the population standard deviations and other population statistics by stratum are required m to implement the conservative upper bounds if needed. If you do not have a Spec file, you can create one in Excel and import it; please see the section below on creating a Spec file by hand. The program will use the information in the Spec file to search for the sample file and high/low value file(s) and automatically fill in all the information to perform the evaluation. It will look for a sample file and high/low value file(s) in the current project folder that have the same names as the files created in planning and named in the Spec file except it will be looking for a hyphen (-) after those names, a phenomenon created when importing an Excel worksheet. For example, if during planning the sample name (Output Filename entry) is “CVSS Sample” and a high values file was created, which would be automatically named “CVS Sample_HV”, then exporting these to Excel will result in Excel files “CVS Sample.xlsx” and “CVS Sample_HV.xlsx”. The worksheet names will be “Sheet1” for this example. After importing, the files will be called “CVS Sample-Sheet1” and “CVS Sample_HV-Sheet1”. The sheet names do not matter, just that the hyphen is there. Please note that for this to work, the user must not change the Output Filename Prefix entry and simply accept the default when performing Excel import.

ADA’s CVS Sample Evaluation utility allows you to evaluate a sample that is Parquet data. Parquet is the format ADA uses for storing data files. 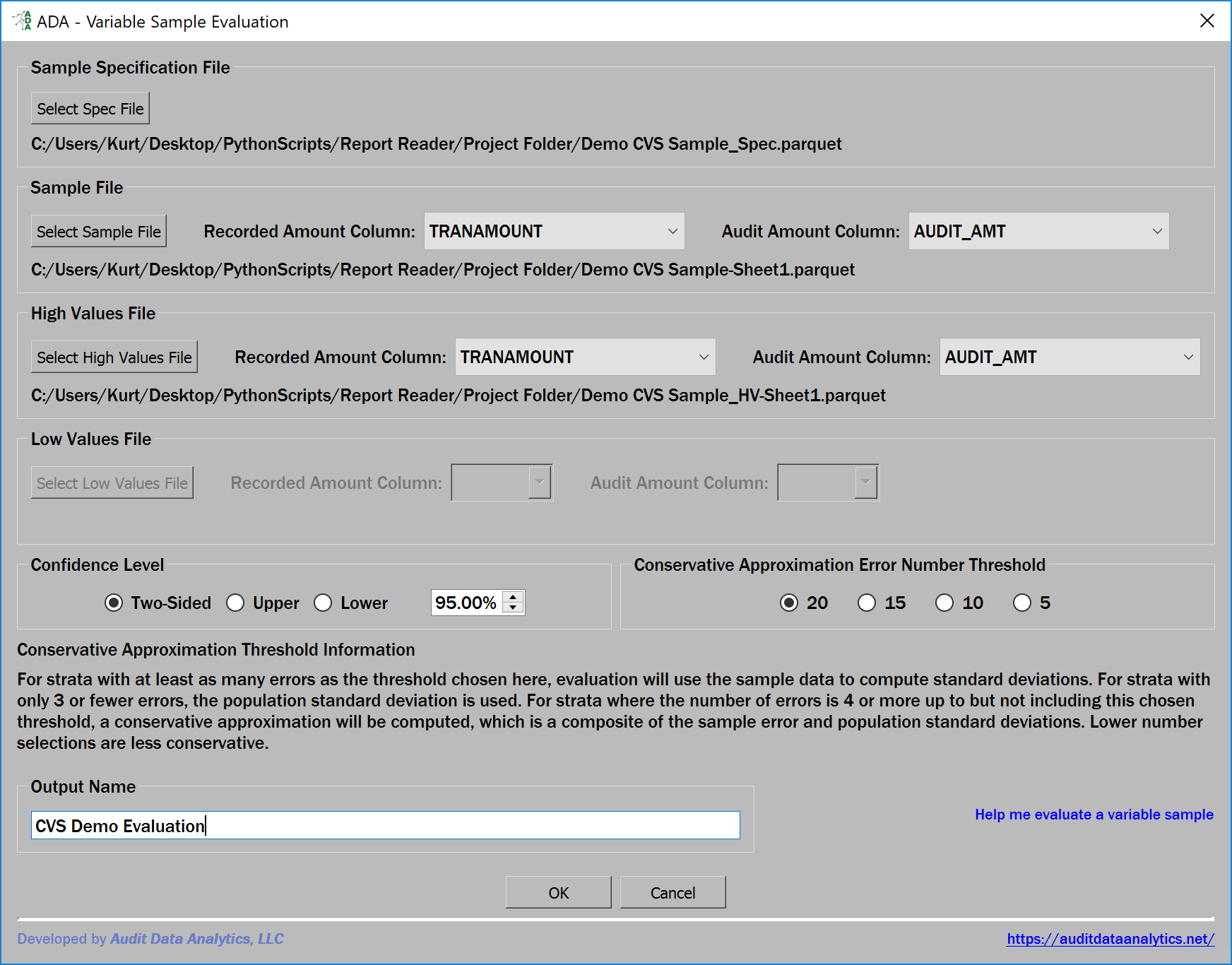 Sample File. This is required. Once provided, the user will need to choose the appropriate recorded amount and audited amount columns.

High Values File. This is optional and whether one exists depends on how the sample was planned and extracted in CVS Sample Planning. If provided, the user will need to choose the appropriate recorded amount and audited amount columns.

Low Values File. This is optional and whether one exists depends on how the sample was planned and extracted in CVS Sample Planning. If provided, the user will need to choose the appropriate recorded amount and audited amount columns.

Output Name. Name your results data file. It will be saved in the project folder with a .parquet extension. Here, the output file will be named CVS Demo Evaluation.parquet.

If the user used CVS Sample Planning to create their sample, then a Spec file was already created at that time and the user should use that file and disregard this section. If the user created their sample through some other means, then a basic Spec file will need to be prepared. One good method is to create a Spec file by planning a sample that you do not intend to use and then export the Spec file to Excel for the appropriate changes.

Here is a Spec file created using CVS Sample Planning. It has superfluous information at the top that you do not need.

This screenshot shows the relevant format in Excel. One must provide how the population was stratified with strata statistics for the population.

After import, the file looks like this in ADA and one can use it to perform an evaluation:

After generating the results files, it is expected that the user will export them to Excel, which can easily be done with Quick Export, where the user will have complete control over presentation of their results and be able to easily include the output in their reports and papers. The following views of the output are in Excel with no additional formatting applied other than zooming them down to be able to fit on screen before taking the screenshot.

An evaluation will produce two files: Results Overview and Detailed Calculations. The first one uses the Output Name exactly and represents the overview of the results. The second file uses the Output Name and follows it with a _DetailedCalcs suffix. The first one we will call the Results Overview and the second one we will call the Detailed Calculations.

Here is an example of a Results Overview:

The first part contains information on the evaluation of the sample and includes some information obtained from the Spec file:

These results tell us the population is overstated by almost $4 million as a point estimate. It could be overstated by about as much as $9 million and understated by about as much as $1.2 to $1.3 million according to the confidence intervals for the error. Since the Error Lower Limit and Error Upper Limit are different signs, this sample does not provide conclusive statistical evidence that the population error is significantly different from zero. The sample of size 202 had 28 errors, but only 4 occurred in the last two strata (2 each). As can be seen in the Detailed Calculations below, the population variances were used in place of the sample variances formed from these 2 errors, resulting in much wider confidence intervals. This sample design was overstratified and would have benefited from fewer strata (4 strata at the most) and a larger sample size.

The following paragraphs provide rough descriptions of the estimators.

The Mean per Unit Estimator, or just Mean Estimator, is less efficient than the other estimators. So, it tends to be (a lot) less accurate for the same sample size. The Mean estimator projects based solely on the audited amounts. It works by taking the average of the sample audited amounts and multiplying the average by the population size for that stratum. The Mean estimator is used when a sample must be pulled with no access to recorded amounts.

The Difference Estimator calculates the average sample difference per stratum and multiplies the average by the population size for that stratum. Differences, or errors, are calculated by subtracting the recorded amount from the audited amount (i.e. Audit_Amt – Recorded_Amt). The difference therefore reflects the amount one would have to add to the recorded amount to get the true, audited amount. Being the average, it is an unbiased estimator of the sample differences. The Difference estimator requires a good number of errors per stratum and must have errors in every stratum to be effective. The Combined Ratio and Combined Regression estimators are usually preferred when at least one stratum has no errors.

The Regression Estimator basically performs a simple regression of the audited amounts on the recorded amounts, forming a slightly more flexible ratio estimator. It is usually more efficient than the Ratio Estimator and is preferred when sample sizes are small. Like with the Ratio Estimator, the Combined Regression estimator is almost always preferred to the Separate Regression estimator except when the regression coefficients vary widely across strata and the sample has several errors in each stratum.

The Detailed Calculations provide all the calculations made by stratum to generate the numbers in the Results Overview. The column names are mathematical variable names that closely follow the nomenclature in Statistical Auditing by Donald M. Roberts, enabling an accurate match against the text. Descriptions and totals (if applicable/used/helpful) are provided below the columns.

If you have questions about ADA software or you would like to know about purchasing custom ADA analytics, wonderful! Please call us at (864) 625 – 2524, and we’ll be happy to help.

How to Import Data with ADA

How to Quick Export Data with ADA

How to Manage Columns with ADA

How to Write Criteria with ADA

How to Filter Data with ADA

How to Join Data with ADA

How to Detect Duplicates with ADA

How to Summarize Data with ADA

How to Append Data with ADA

How to Sort Data with ADA

How to Plan an Attribute Sample with ADA

How to Perform Error Assurance with ADA

How to Evaluate an Attribute Sample with ADA

How to Plan a Variable Sample with ADA

How to Evaluate a Variable Sample with ADA

How to Plan a MUS Sample with ADA

How to Evaluate a MUS Sample with ADA

How to Random Sample with ADA